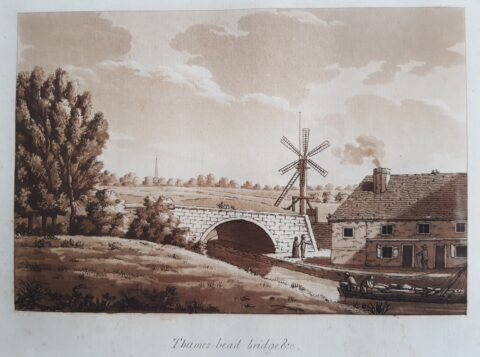 Thames Head Wharf 1790
This is from Picturesque Views on the River Thames: From it’s Source in Gloucestershire to the Nore,…Vol 1, by Samuel Ireland published in 1792. The print belongs to Mr Paul Gillett. The bridge is still there but is no longer carrying the A433 which is on a modern bridge east of the original. The wharf and it’s buildings were one of twelve Wharves along the Thames and Severn Canal from the port at Brimscombe to the Thames at Lechlade. The company had dug a borehole 100ft to provide water for the canal. They constructed a six-sailed windmill to pump water out of the borehole.
In the distance you can see the spire of Kemble Church so we are looking east. Richardson shows the tower but I’m not sure that isn’t poetic licence.